Beware the Bulging Battery! (And What to Do If Yours Expands) 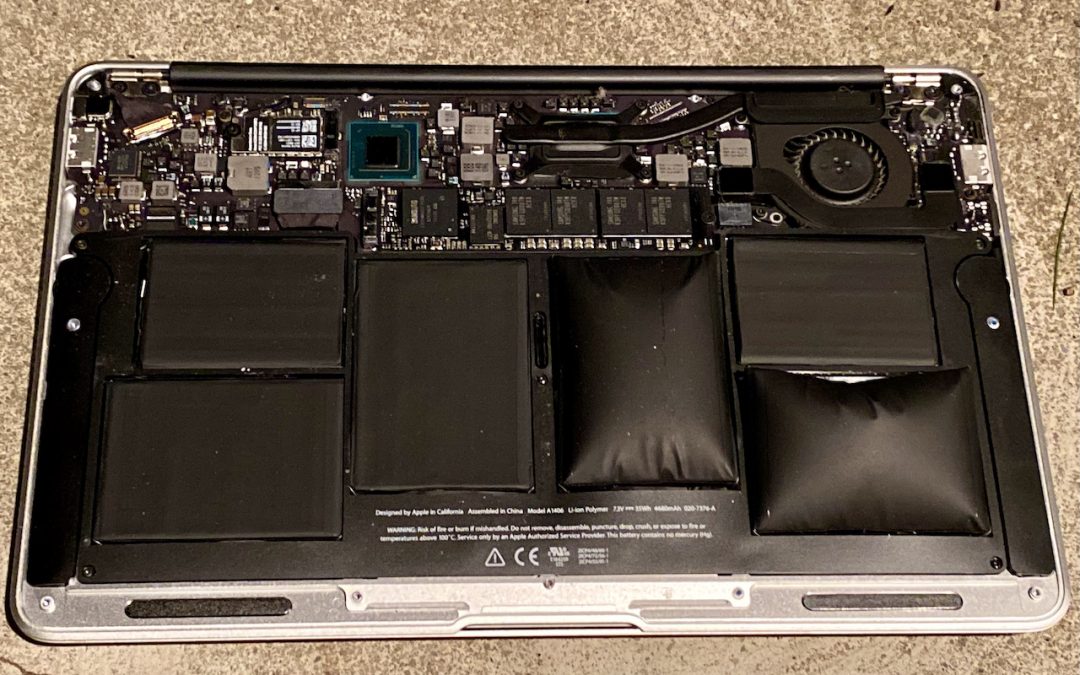 We’ve been seeing a spate of bulging batteries of late, both in Mac laptops and iPhones. A bulging battery is a Very Bad Thing™ and must be dealt with immediately because it could catch fire or even explode. As lithium-ion batteries age, the chemical reactions that produce power no longer complete fully, resulting in the creation of gasses that can cause the battery to swell. Additionally, manufacturing errors or damage to the membranes that separate the internal layers of the battery can also lead to swelling.

What to Look For

With Mac laptops, a variety of problems—some rather subtle—can indicate that the internal battery is swelling, including the screen not closing properly, a gap between the upper and lower parts of the case, a failure to sit perfectly flat, problems clicking the trackpad, or keyboard keys malfunctioning.

With an iPhone or iPad, a swollen battery is usually obvious because it starts to warp the case and can even crack the screen—it all depends on where the swelling takes place and what part of the device gives way first.

When you discover a bulging battery, unplug the device immediately and turn it off as soon as you can. Continued charging or use could lead to a fire or explosion. However, if the device is still functional and you need to copy data off or let a final backup run, try to put it in a place where it’s less likely to cause problems—on a concrete, stone, or tile surface, for instance, and preferably outside as long as it’s not wet, hot, or in the sun.

In some cases, as with older MacBooks, it’s relatively easy to disassemble the case and remove the battery. If you feel comfortable doing that, you may be able to reduce the chances of further damage. It’s much harder to work on iPhones and iPads.

Make sure you’re somewhere well-ventilated and safe, with easy access to outside and preferably a foam-based fire extinguisher at hand. If a fire does start, water will also put it out—make sure to have plenty on hand. Be sure to wear eye protection and gloves. Also, make sure you have somewhere safe to store the battery once removed, such as a metal can with a lid or with sand in it. Finally, be super careful around the battery, and whatever you do, do not puncture the swollen cell—some of the gases could be harmful.

Once you’ve removed the battery from the device, you must take it somewhere for recycling. Under no circumstances should you send it via the mail or put it in the regular garbage. Although various companies—including Apple, Best Buy, Home Depot, and Lowes—recycle batteries, call your local store first to see if they take swollen batteries (they may not be equipped to do so safely). Better yet, check with your county or municipality to see where you should take hazardous waste.

For additional details and advice, see iFixit’s guide and the many comments.

Getting Your Device Fixed

The best-case scenario is that you have AppleCare+ on the device such that Austin MacWorks/Apple will fix it for you. However, that’s a bit unlikely because batteries usually bulge only on older devices. Regardless of AppleCare status, Austin MacWorks can help you with battery service and recycling — we’re an Apple Authorized Service Provider. Call us at 512-476-7000 for more information.

Although it’s possible to replace batteries yourself—refer to the iFixit site for instructions and links to replacement batteries—it can be finicky work, particularly in iPhones and iPads, and you may not save that much money in the end.

Sadly, particularly with an older iPhone, the damage from the bulging battery may prevent a repair from being worthwhile. The iPhone X pictured above still worked fine even though the swollen battery broke its screen, but it wasn’t worth the money to replace the battery and the screen for a 4-year-old iPhone. In such cases, recycle the entire unit with the appropriate hazardous waste facility.