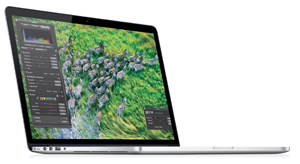 Apple just announced a sleek, super-thin new MacBook Pro. The new unit, which looks like a MacBook Air in some respects, is only 0.71 inches thick.

One of the most exciting features: the new model features a Retina display. Apple says they “wanted this MacBook Pro to have a screen as vivid as your imagination. What we created was the world’s highest-resolution notebook display — and our most jaw-dropping Retina display yet.”

The screen is 15.4″ across, at a 2880×1800 resolution, for a total of 5,184,000 pixels.  Apple says that this is the highest resolution notebook display in the world. The company also said that it has managed to reduce glare and reflection by 75%.

OS X Lion has been updated to take advantage of the new display. Other applications will have to be updated by their respective developers to support the new available pixel density. Adobe, of course, is working on a Retina-enabled version of Photoshop.

The new laptop is far more than a screen swap, according to Apple “everything inside this new MacBook Pro has been updated. You will be able to configure the new MacBook Pro with a quad-core i7, up to 16 gigabytes of RAM, and a graphics card with 1 gigabyte of its own memory. A 768 gigabyte SSD will be available. The computer has a claimed battery life of 7 hours.