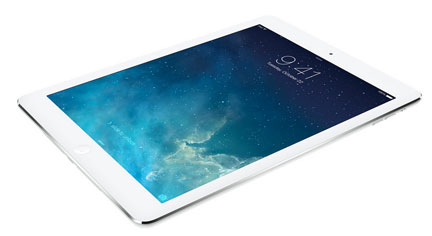 Today, Apple introduced its new iPad Air, a thin, light addition to the iPad lineup, and the fifth generation of its market-leading tablet.

Among its new features, the iPad will weigh 1 pound, down from 1.4 pounds. It’s 20% thinner and 28% lighter than the current fourth-generation iPad.

The iPad Air will have the same 9.7-inch screen as previous iPads and pack the same A7 processing chip that’s in the iPhone 5S. That will make it 72 times faster than the original iPad, according to Apple Senior Vice President Phil Schiller.

Apple also announced an revamped iPad Mini starting at $399. It will be available later in November in silver or space gray and will pack a speedy A7 processor and the same high-resolution “Retina display” as bigger iPads.